With the official start of summer and warm temperatures returning, I know that residents are excited to get outdoors and enjoy our City's pools, splash pads, and beaches. The City announced the reopening of 10 more outdoor pools and this is on top of the ourtdoor splash and spray pads that were opened on May 20th. So, I encourage everyone to take advantage of the opportunity to enjoy these great community amenities.

Due to the pandemic, the City was not able to operate the usual number of lifeguard training courses so there is a need for additional lifeguards across the City. If you know of anyone interested in completing the mandatory certification processes and courses required to be a lifeguard the City is continuing to hire lifeguards. Information can be found here.

We all know that the costs for child care are a major challenge for parents, so it is good to see that the process is moving forward to implement the Federal-Provincial child care agreement which will result eventually in child care costs moving to more affordable levels. By 2025, the cost of childcare will move to $10 per day. As part of this process leading to 2025, the City has announced that, starting yesterday, all licensed child care operators in Toronto may apply to be part of the new Canada-Wide Early Learning and Child Care (CWELCC) funding program. More details on the announcement can be found here.

The City is also seeking representatives to serve on the Climate Advisory Committee (CAG) to advise the City's implementation of the TransformTO Net Zero Strategy! CAG members will act as advisors, champions and reviewers of the policies, programs and initiatives under development for implementing the TransformTO Net Zero Strategy. I have provided more information about this opportunity below, and you can click here to learn more.

For the first time since 2019, on June 21st a Sunrise Ceremony was held at Nathan Phillips Square in honour of National Indigenous Peoples Day, a day to celebrate the beautiful culture and heritage of First Nations, Inuit, and Métis across our City. National Indigenous Peoples Day was first proclaimed in 1996, and has helped to build stronger relationships with Indigenous communities, rooted in mutual respect and understanding.

The City remains committed to advancing truth, justice and reconciliation and is working closely with Indigenous partners and the Indigenous Affairs Office to implement the City’s first Reconciliation Action Plan which you can read here.

The Toronto Rent Bank is a program designed to assist low-income residents facing financial stress by providing interest-free loans to help with rental deposits, rental arrears, or to prevent homelessness.

This program was adjusted as a pilot in 2021 to provide grants instead of loans, and has proven to be especially helpful and supportive. A recent report to the Planning and Housing Committee, which I chair, illustrated that as of March 31st 2022, 1,744 households were able to avoid eviction by receiving a grant through the Rent Bank program, up 52% from the previous year when the Rent Bank provided loans.

This increased impact is great news, and this is why I'm glad that during the June 16 City Council meeting, Council approved a motion recommended by the Planning and Housing Committee to permanently convert the Toronto Rent Bank program into a grant-based program. You can learn more about the Rent Bank here.

During the June 15th City Council Meeting, Council approved the installation of 32 additional EV charging stations by Toronto Hydro for 17 residential on-street permit parking locations in our City, including two in Davenport! The two in Davenport will be located at 685 Dovercourt, and will be made available on a first-come-first-serve basis. We are also on track to install 50 more charging stations across Toronto by 2023!

The addition of these new charging stations will help meet the increasing community for electric vehicle infrastructure in our City. You can learn more here.

Great news for sports fans in our City! On June 16th, the Fédération Internationale de Football Association (FIFA) announced that Toronto would be one of the World Cup 2026 host cities!

Toronto will serve as one of the FIFA host cities alongside Vancouver, and 14 other cities in Mexico and the United States, and will host multiple matches over the course of the tournament.

Toronto is a world class City, and I am looking forward to joining our community in celebrating the world cup here in 2026!

Are you a climate champion? Do you have ideas on how the City should achieve net zero greenhouse gas emissions? The City of Toronto is seeking residents, local organizations, and key stakeholders to advise the City on the implementation of the TransformTO Net Zero Strategy. TransformTO is Toronto’s climate action strategy to reduce greenhouse gas (GHG) emissions to net zero by 2040 – one of the most ambitious targets in North America.

The Climate Advisory Group (CAG) will have approximately 20 members from the community, representing local organizations as well as individuals. It is anticipated the CAG will meet four times per year, with in person and hybrid meeting options that allow the group to be flexible to changing personal circumstances and community health guidelines.

Applications will be welcomed from all community members, including local organizations, community leaders, and residents from communities experiencing social, economic and other barriers.

The deadline to submit applications is July 20th at 11:59pm! Click here to learn more.

On March 28, the federal and provincial governments announced they had reached an agreement with respect to the Canada-Wide Early Learning and Child Care (CWELCC) initiative. We all know that the costs for child care are a major challenge for parents and so it is good to see that the process is moving forward to implement the Federal-Provincial child care agreement which will result eventually in child care costs moving to more affordable levels.

By 2025, the cost of childcare will move to $10 per day. As part of this process leading to 2025, the City has announced that, starting yesterday, all licensed child care operators in Toronto may apply to be part of the new CWELCC funding program. More details on the announcement can be found here.

MacGregor Park Kick Off To Summer On June 28th

An afternoon of fun activities for families to come out and enjoy as we celebrate the kick off to summer!

Treats will be handed out!

The Abrigo Centre, with support from my office, will be hosting a vaccination clinic on June 28th from 4:00 p.m. to 8:00 p.m. at 1645 Dufferin Street! Both Pfizer and Moderna will be administered, all forms of ID are accepted. The clinic will have also have supports for the Portuguese speaking community. 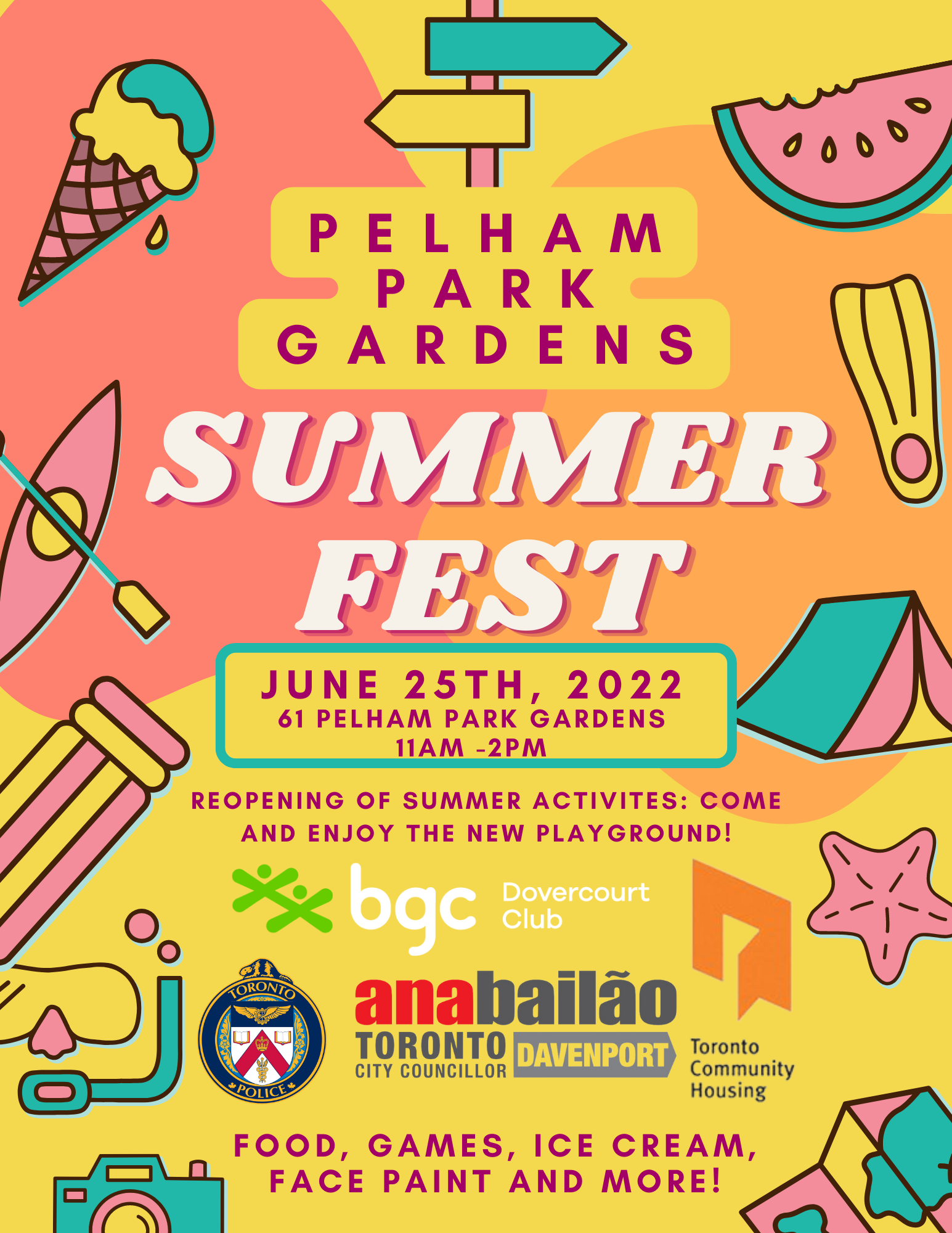 On June 25th at 11:00 a.m. the Dovercourt Boys and Girls Club will be hosting their Pelham Park Gardens Summer Fest! Come and enjoy the new playground, connect with neighbours, and enjoy the warm weather!

This will be an opportunity to connect with new members of our community, as well as to learn more about modular housing and its benefits. You'll also be able to enjoy live music and refreshments!

We have had six compost days and an Environment Day across the Davenport community this season,.

Our final Environment Day is scheduled for Saturday July 16th at Loretto College School (151 Rosemount Avenue) from 10am to 2pm.  More details on what is available at Community Environment Days can be found at this link.